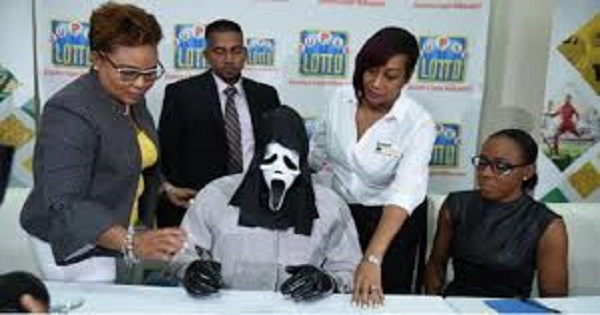 Imagine winning the lottery, the thrill of your life-changing for the better in a moment’s notice. But with that change comes some serious negatives. The moment you go on television your identity is out there for anyone and everyone to see. First, you have to worry about people around your area that may be looking for a quick buck. Then you have to worry about the family members that are going to hound you for money. There’s nothing wrong with helping family out, but what if it’s family you NEVER see?

This is the case for a guy who won Jamaica’s Super Lotto. He won 158.4 million which is 1.7 million in US currency. With the win came the news that he had to claim his prize. The man waited for 54 days before he claimed the ticket. When he found out he had to be on television in order to claim his prize, he ended up wearing a scream mask and some gloves.

Check out the video below by ABC 13 Houston

Do You Have To Show Your Face When You Win The Lotto?

For some really odd reason, you have to reveal your identity when you win in all but 6 states. I don’t think I would want my identity revealed when I win the lotto.  However, if you’re in the U.S. states Delaware, Kansas, Maryland, North Dakota, South Carolina, and Ohio you don’t have to. So for those of you who like to play the lotto, those are the states to play in if you want to remain anonymous.

What To Do When You Win The Lotto

If you ever win the lotto and want to know what to do, we have you covered. There are a lot of things that you SHOULD do when you win the lotto to cover yourself. There are a lot of people that will be coming for some of your prize money, friend and foe. So if you’ve ever wondered what you need to do, check out the video below we found by CBS NEWS.